We Are All America Roundtable - Standing up for refugees & divided families 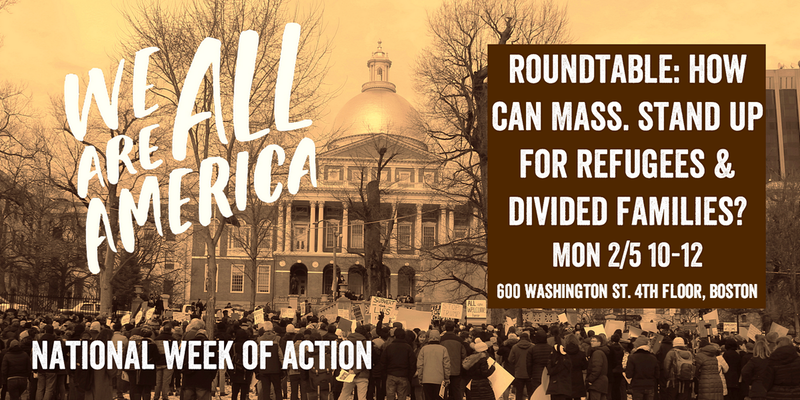 Saturday, January 27, marked the anniversary of the Trump executive orders banning people from seven (then six) Muslim-majority countries, and all refugees, from entering the United States. Since then, we've seen additional bans, the dismantling of the U.S. refugee resettlement program, widespread detentions of asylum-seekers, even children, and much more.

MIRA has joined a project called We Are All America that aims to send a strong message that we stand together with Muslims, refugees and all targeted communities. As part of a National Week of Action, we're hosting a roundtable on Monday, February 5, bringing together refugee resettlement agencies, legal experts, immigrant advocates, and people directly affected by the refugee and travel bans.

Along with MIRA, the event is co-hosted by the ACLU of Massachusetts, the Council on American-Islamic Relations (CAIR), Catholic Charities of Boston, and the American Immigration Lawyers Association (AILA). Our goal is to take stock of the past year, assess the outlook for refugees, Muslims and immigrants in our communities, and send a strong message of solidarity. Journalists will be invited to the event, and will have an opportunity to do interviews afterward.

We hope you can join us! We feel very strongly about the need to work together to push back against these hateful policies, and to keep raising public awareness.