Together for All - Solidarity Rally for Refugees & Immigrants 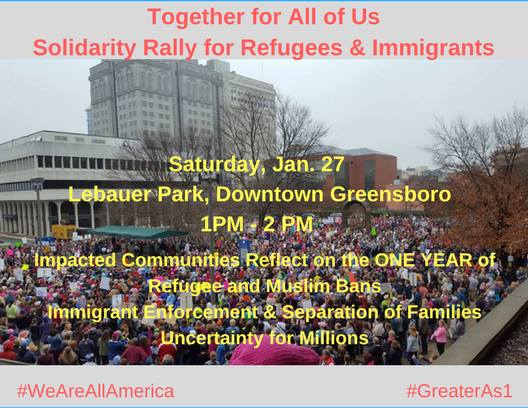 On January 25 the Trump Administration issued an Executive Order on Immigration, two days later, January 27, it released Executive Orders banning individuals from seven (then six) Muslim-majority countries and all refugees from entering the country. Since that time, multiple additional bans on people from Muslim-majority countries and has taken steps to dismantle the U.S. refugee program, Temporary Protected Status for millions, thousands of families have been torn apart by senseless deportations, and just recently thousands of young men and women face uncertainty about their future.

Now, a year later, we are in a critical time, and January 27th is a critical date, as impacted people share their experiences and policy makers across the country reaffirm their support and can be challenged to recommit to solidarity with Muslims, refugee, and all people targeted by this administration.

Join Us at the Lebauer Park as we transcend all religious and cultural differences to build inclusive communities where we all belong.