We Are All America Event at Beaverton City Hall 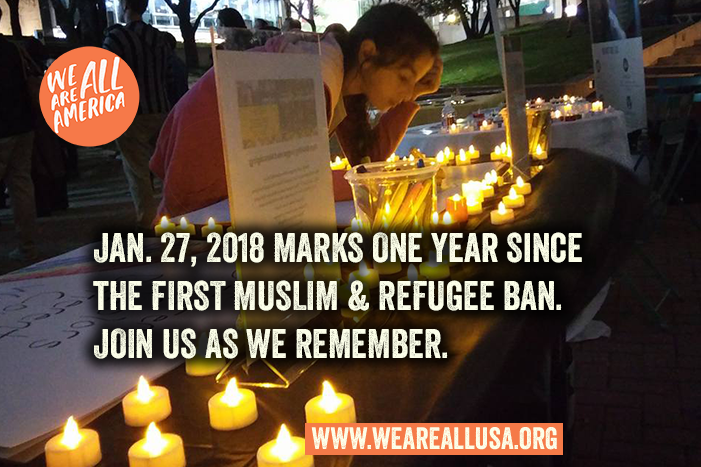 The City of Beaverton invites the public to gather Friday, February 2 at 5:30 pm at City Hall (12725 SW Millikan Way) for a special public event as part of the We Are All America National Week of Action. The week marks the one year anniversary of the first Muslim and refugee ban and seeks to call attention to the need to strengthen our nation’s commitment to welcome and protect those seeking freedom, safety and refuge in the United States.

"The week offers another opportunity to reaffirm our commitment to being a welcoming community and publicly state that Beaverton rejects any policy or action that threatens the rights and well-being of Muslims, refugees, immigrants or any other targeted segment of our community," said Mayor Denny Doyle.

The gathering will be hosted as part of the city’s Welcoming Beaverton initiative and in collaboration with the nonprofit Unite Oregon. The event will feature several speakers, including a city official, member of the community directly affected by the ban, and other community leaders organizing actions in solidarity with targeted communities.

"We gather this week to remind us of what America is all about, which is inclusion and welcoming," said Diversity Advisory Board member Manijeh Mehrnoosh. "It has been really inspiring to see so many people come out to raise awareness and share that no matter how much they try to divide us we become more united."

More information about the national We Are All America campaign is available online at www.weareallusa.org.

Beaverton officially became a Welcoming City in April 2015, joining a network of around a hundred other actively welcoming municipalities across the country. Welcoming America members share the belief that being a welcoming community for all, including immigrants and refugees, makes us stronger economically, socially and culturally. The local Welcoming Beaverton initiative is led by the Mayor’s Office and has almost a dozen official community partners including nonprofits, faith communities, and special government districts.

The city of Beaverton is home to more than 95,000 residents and is Oregon’s sixth largest city. We are a friendly, active and responsive city well-known for our exceptional community services and amenities, helping Beaverton residents enjoy a high quality of life. Ranked in Money magazine’s Best Places to Live, Beaverton truly is "The Best of Oregon."