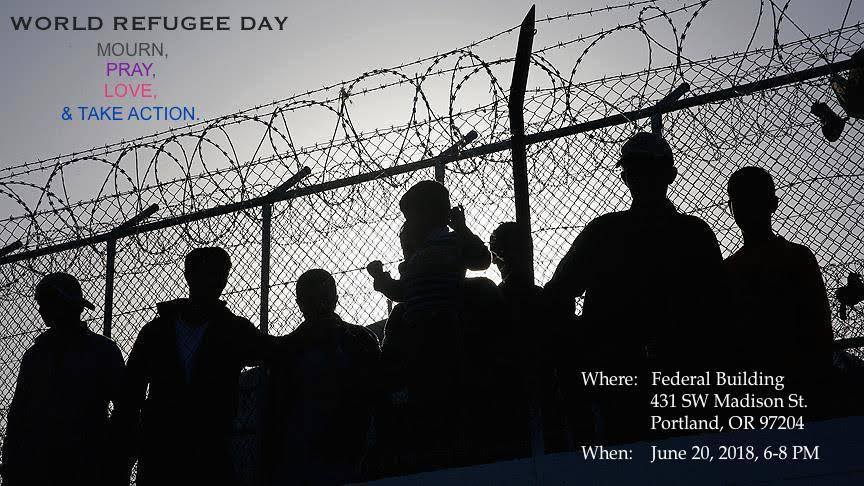 June 20th is World Refugee Day. It has been designated internationally as an ongoing celebration each year of the courage, resiliency, and contributions that refugees make to our communities.

In the past, we have organized celebratory events to commemorate this day. But this year is not a typical year, as we have seen refugees and asylees being criminalized, children separated from their parents and literally held in cages, and people who are seeking safety being shipped to for-profit jails.

As it stands today, our political climate threatens the lives of millions of immigrants and refugees living in the United States.

Globally, the number of displaced persons worldwide is now the largest at any point in history, with UNHCR reporting 65.3 million, 21.3 million of whom are refugees. At the depth of this international crisis, we are witnessing the disintegration of our traditionally bipartisan supported U.S. Refugee Resettlement Program. The Trump Administration issued a Presidential Determination that will reduce U.S. refugee admissions from 110,000 to 45,000, the lowest it has been in nearly four decades--and we are likely not to even see half of those arrive. Refugee arrivals from Muslim countries are almost completely halted; and refugee families are desperately trying to cope with the inability to be reunited with their loved ones. The U.S. Supreme Court will soon make a final ruling on the Trump Administration’s “Muslim Travel Ban”, which will make a powerful statement about our country’s values.

“As a former refugee, I believe we must take this time to celebrate the many contributions refugees bring to our country,” said Kayse Jama, Executive Director of Unite Oregon, “but this is also a time for action.”

Unite Oregon invites you to our Mourn Pray, Love, and Take Action Vigil at Terry Schrunk Plaza on Wednesday, June 20th at 6 p.m.

We must support these vulnerable communities. This Vigil will serve as a time for us to gather, to mourn and bear witness. Please join us in solidarity with our refugees, asylees, DACA and TPS recipients who will give their personal testimony, and our spiritual and religious leaders who will instill in us the hope and strength to take action.

This event will be family friendly in messaging, so we encourage you to bring your family, friends, and pets.