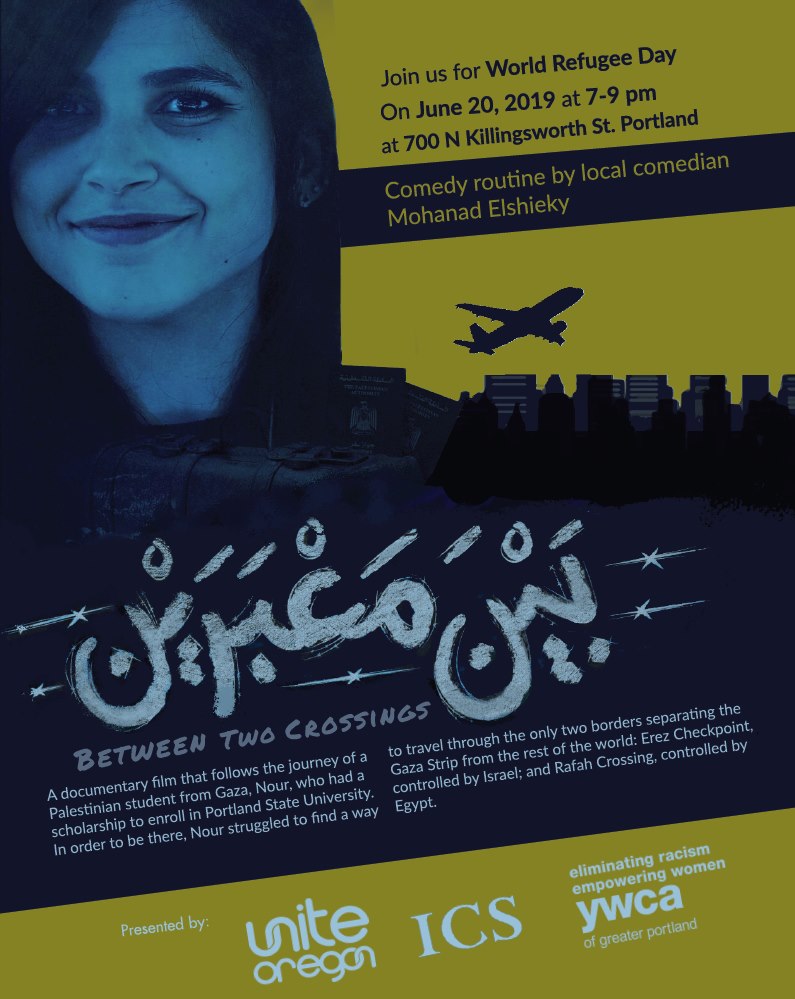 In honor of World Refugee Day on June 20th, the We Are All Oregon Coalition brings the Portland premiere of "Between Two Crossings," a documentary film that follows the journey of a Palestinian student named Nour from Gaza. Nour had a scholarship to enroll in Portland State University in the United States. In order to be there, Nour struggled to find a way to travel through the only two gates separating the Gaza Strip from the rest of the world: Erez Checkpoint, controlled by Israel; and Rafah Crossing, controlled by Egypt.

This 40-minute documentary was directed by a Palestinian journalist and filmmaker from Gaza, Yasser Murtaja, who was shot and killed by an Israeli sniper while covering the protest of Great March of Return on April 6, 2018. Many people around the world witnessed Yasser’s wish before he died through his Facebook status: that one day he wanted to be able to see Gaza and the world from the window of an airplane. His life was stolen from him and he was not able to fulfill his wish, nor did he have the chance to finalize this documentary and witness it screened all over the world. Join us on World Refugee Day for the Portland premiere of his documentary and a discussion with Nour.

Nour is a 24 year old refugee from Palestine. She is studying Business Administration at PCC and is hoping to graduate with her Bachelors degree from PSU. Nour was born and raised in Gaza city in Palestine and moved to the USA when she was 21 years old to seek a better life and a better education,

After the screening and discussion, Mohanad Elshieky will be closing the event with his comedic genius! Mohaned has a special skill for making you laugh at the seemingly unlaughable. Recently named one of Team Coco’s "Comics to Watch at the New York Comedy Festival, the Libyan-born comedian combines a deceptively laid-back demeanor with his whip-smart perspective on politics and culture. The Portland Mercury called him “an undisputed genius of comedy,” and he's been featured on shows like Lovett or Leave It, Pod Save The People, Harmontown and the docuseries “Unprotected Sets” Produced by Wanda Sykes. Elshieky zeros in on topics that make seem off limits - then surprises you with how hard you’re laughing. https://www.mohanadelshieky.com/

Join us for an informative evening in celebration and support of refugees worldwide. Refreshments will be provided.

REGISTRATION is encouraged but not required. Registering will help us know how many folks to set up for! https://www.ywcapdx.org/between-two-crossings/

This is a FREE EVENT with a suggested DONATION of $5.

Parking is public/street parking and not time restricted after 7pm

If we can make any accommodation to make sure this event is accessible to you, please let us know.