WE ARE ALL AMERICA ACTION ALERT:
Demand We #Welcome75K Refugees! 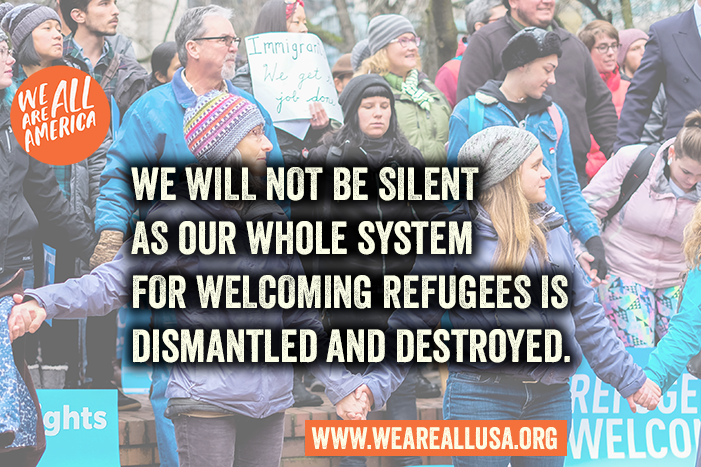 Our Hearts are Big Enough, Our Arms are Wide Enough
to Welcome 75,000 Refugees

REFUGEE RESETTLEMENT IN THE U.S. IS AT DIRE RISK. Since taking office, Trump has launched ongoing attacks on refugee resettlement, from halting refugee admissions as part of his travel ban to nominating the virulently anti-immigrant/refugee Ronald Mortensen to lead the Bureau of Population, Refugees and Migration at the State Department.

Last year, Trump set the refugee admissions goal at 45,000 – the lowest level in U.S. history. Even more upsetting is that three-quarters of the way through the year, we are on track to resettle less than half that number. Now, Trump has signaled his intention to reduce refugee admissions even further.

We are facing the largest global refugee crisis in recorded history, with more than 68.5 million people displaced from their homes, 25.4 million of whom are registered refugees. Refugee resettlement saves lives, encourages other countries to keep their doors open to people needing protection, and promotes regional stability and global security. With global need at its highest, our U.S. refugee resettlement program is being systematically dismantled. This is unconscionable.

As refugees and friends of refugees, we know the challenges newcomers face are greater than ever, and we must rally in support of our shared values of welcome. It is time to join together and uphold our nation's commitment to protect those seeking freedom, safety and refugee in the United States. Please join We Are All America and our partners across the country in supporting the life-saving work of the U.S. Refugee Resettlement Program.

1. For Organizations: Sign on to the #Welcome75K statement of support and demand Trump raise the refugee admissions goal to 75,000 in 2019.

I'm your constituent from [CITY/TOWN], and I urge you to support the U.S. refugee resettlement program. I strongly oppose rumors that President Trump will release an all-time low cap on refugee admissions. I urge you to do everything in your power to see that the administration commit to resettling at least 75,000 refugees for fiscal year 2019. Resettlement is a core American legacy that allows refugees to rebuild their lives in safety and dignity. My community welcomes refugees and immigrants, and I urge you to do the same."

3. Join We Are All America and advocate for refugees during the August recess, when your U.S. Senators and Representatives will be in their home districts. Visit them, attend their town halls and constituent events, and make your voices heard. Click here for Refugee Council USA's advocacy toolkit.

5. Submit an OpEd to your local newspaper or media outlet. Click here for sample Letters to the Editor and tips.